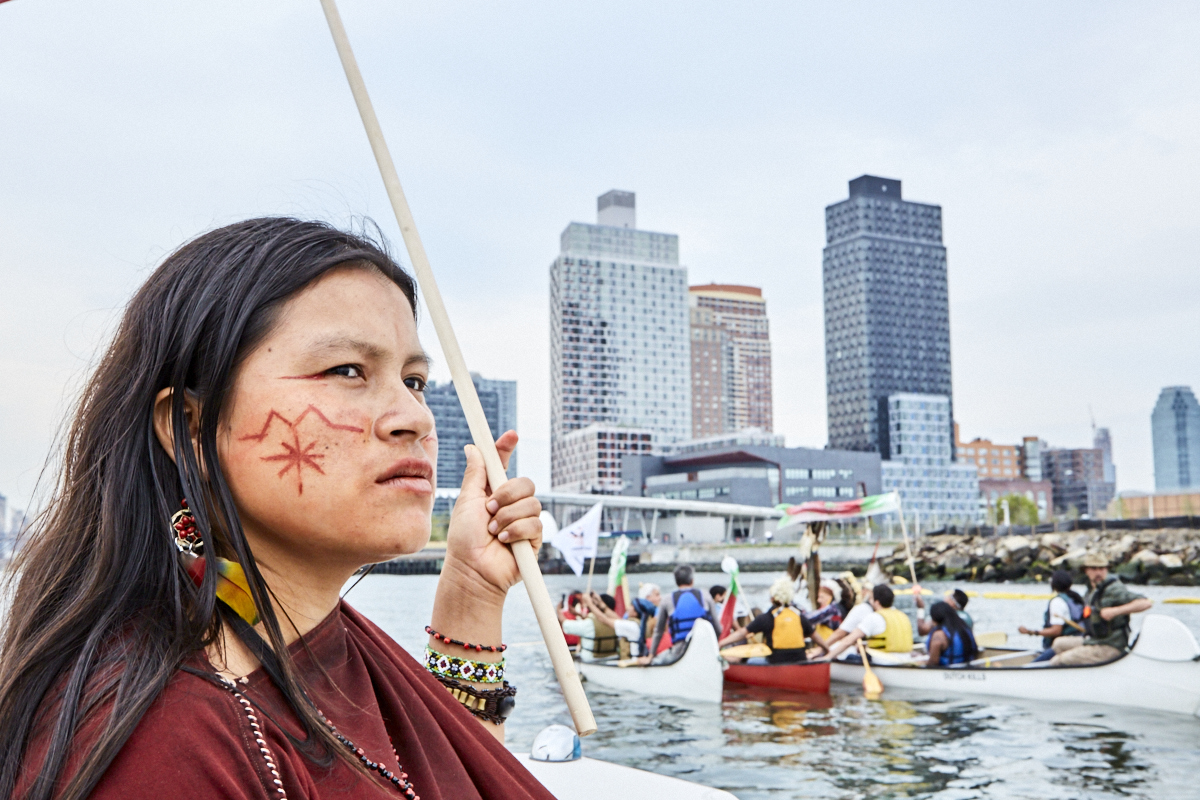 Earth Day 2016 saw a series of actions take place in New York with our indigenous partners. Starting on the eve of Earth Day, a midnight vigil was organised in New York’s most famous precinct, Times Square. An immersive art exhibition, Jungle-ized, took over Times Square for Earth Month and the concrete jungle was transported to the Amazon Jungle.

Indigenous leaders from the Amazon Basin, MesoAmerica and Indonesia as well as David de Rothschild gathered by candlelight to pay tribute to environment defenders who have been killed protecting the planet. At 11.57pm many of the billboards were transformed to images of the jungle, jaguars and the Shipibo people. Carolina Oliveros from Colombia, sang poignant tones that ushered in a moment of silence in one of the busiest areas of the city.

On Earth Day, female indigenous leaders from Guatemala and Indonesia spoke with passion about the role women play in climate justice. Ana Marìa Castañeda Diego, Ana Centeno and Mina Setra spoke outside the UN on the day the Paris Agreement was signed by more than 150 countries.

Later that day from North Brooklyn Boathouse, indigenous leaders joined members of the Onondaga Nation to take part in the Global Canoe initiative.

But New York wasn’t the only place to highlight the role indigenous peoples play in protecting the forest and our environment.

In Edinburgh,Jaye Renold, hosted a local screening at the Shrub Swap & Reuse Hub. As well as a focus on oil extraction in the Peruvian Amazon, the screening also looked at various ways local communities are fighting destructive resource extraction, including with drone technology and by using cultural heritage to block future oil explorations. Jaye screened Pastaza, produced by the Chaikuni Institute and Alianza Arkana, The Reunion and Detecting Disasters by AIDESEP. The audience were particularly interested in the use of drone technology by indigenous groups across the world and watched Dayaks & Drones as well.

Following the films, a student researcher from the University of Edinburgh shared with us some exciting developments in mycoremediation, the use of fungi to decontaminate landscapes degraded by oil extraction, that is being used in Ecuador. The presence of several Ecuadorians in the audience led to interesting discussions about Yasuni and the current direction of government action in the country. Thanks Jaye!

Forest is Indonesia, A Positive Campaign to Grow Our Love for Indonesia’s Forests – from Leoni

Indonesia Nature Film Society (INFIS) together with various partners and artist launched a movement called Hutan Itu Indonesia (Forest is Indonesia). This is an open-based movement for anyone who is concerned or would like to participate to emphasize the importance of protecting Indonesia’s forest. Series of If Not Us Then Who movies were screened in front of audience of mainly urban youth who live and work around Jakarta. Students from three university in Jakarta were also invited to support this movement.

The fact that is even with such wealth, Indonesian forests have taken a back seat in people’s minds as urbanization accelerates and more than half of the population is living in Java, where only very little forests are left. A 2015 study found that although 57% of urban consumers understand plantations often replace forests, less than 5% of respondents pointed at forest loss as a negative consequence of oil palm development. Some respondents even suggested that one of the positive impacts of oil palm plantations is they “regreen” areas. This indicates that consumers lack a full understanding of the environmental and social benefits that forests provide and consider any areas with trees, such as plantations, to be just as valuable as forests, despite the lack of biodiversity, carbon, hydrological functions, and cultural heritage in monoculture plantations.

“It seems that forests are out of sight, out of mind,” said Leony Aurora as the coordinator of this campaign. This campaign is aimed to raise awareness on the value of forests for all of us– not just those who living around them – and secure a special place in our hearts is critical if we want to preserve this wealth and legacy. “Therefore forests need to reclaim their position as part of the identity of Indonesia,” she added.

The first year objective of this movement is to launch Youth-to-Youth provincial campaign. The daily task force of the movement will create concrete strategies to host other awareness-based events such as forest preservation activities and community market in and outside the forest. This movement might not be the magic from heaven that can heal the devastation of deforestation in Indonesia, but with an optimist hope that this movement will be a significant silver lining of progress in community level in regards to commitment of protecting Indonesia forest.

GS Green Generation hosted a dynamic Earth Day Extravaganza at Green School in Bali, largely showcasing the work of If Not Us Then Who. As we are passionate about issues related to climate change, we wanted to highlight the importance of the signing of the Paris Agreement on Earth Day, while acknowledging so much of the work indigenous peoples are currently doing on the ground in Indonesia to protect forests. We hosted a full-day of activities and workshops-all related to forest land in Indonesia. The school day culminated in a community assembly attended by over 500 students, staff, family and community members. The assembly was a showcase of music, videos, guest speakers, student theatre, song, and activism.

We were so grateful to have Pak Suanartha from AMAN come and speak a bit about the ongoing projects the alliance is working on. One of the most inspirational moments of the assembly was when Dadang from A Conscious Coup came up on stage and sang his anthem ‘Siapa Lagi Kalau Bukan Kita‘ along with hundreds of GS students. It was a special moment for everyone attending, especially for our local Kul Kul connection students who have also adopted the song’s message and ethos. GS Green Generation spoke at the assembly about our current collaboration with Kul Kul Connection students as we prepare for our upcoming adventure to Kalimantan to learn more about Sebangau forest and the work being done to protect it.

We are so grateful for the ongoing support of If Not Us Then Who! The Earth Day Extravaganza fundraiser was a huge success and we raised over 20 million Rupiah to support out local Kul Kul Connection students so they can attend this amazing trip to Kalimantan! Terima Kasih!

Earth Day draws to a close in California – from Kelby

While the rest of the team was celebrating a job well done in New York City, If Not Us Then Who finished off Earth Day in Santa Monica California. Lokal Travel, an ecotourism travel agency based in Los Angeles, invited If Not Us Then Who to screen Dayaks and Drones as a part of their Films for Good program. Shown at the HI Los Angeles Hostel in Santa Monica, the screening was attended by roughly twenty-five hostel-goers, friends, and those curious about ecotourism. Dayaks and Drones was received warmly and raised questions about the consumption of travellers, how drone technology can help map indigenous territories, and how Western travellers can help local economies through tourism. As the night came to a close, thus ended If Not Us Then Who’s global tour-de- force of Earth Day festivities.

A big thank you to all our partners and our new team members for sharing these indigenous stories across the globe on Earth Day 2016.