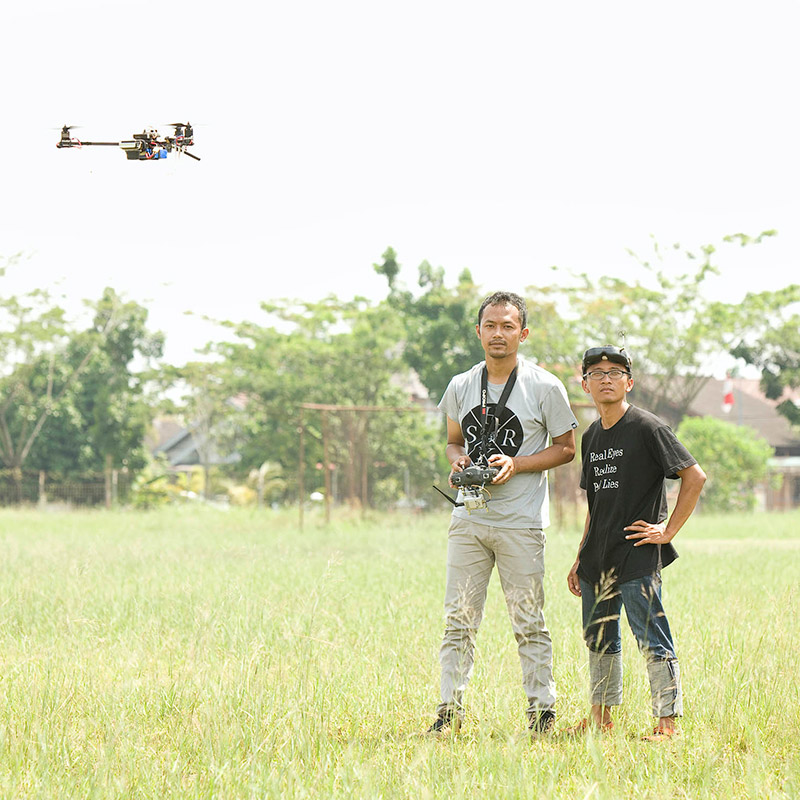 IF NOT US, THEN WHO?
By Wimar Witoelar

It starts with a drone taking off to fly over Setulang in Malinau Regency. Heady aerial shots follow over thick tropical forests, but there is a feeling that this is more than a scenic ride.
This is how the video ‘Dayaks and Drones’ begins. Soon the context becomes clear. This is the spine of a mapmaking process based on principles of participatory mapping – an age-old technique, for how can maps be made if not through public participation? Yet in 69 years of Indonesian independence the public has not been much involved in making public maps. The weakness of civil society has yielded to centralized political powers that see maps as being essential tools for territorial control. Whether it is for objectives of political control, or for subtler strategic purposes to allocate the largesse of the land, the powers behind each government have found it convenient to exclude the wider public from mapmaking. They interpret map-making as a technical top-down process better left out of the hands of common people.

This is changing, in a civil society now invigorated by the prospect of public involvement in the policy process. Numerous civil society organizations are now engaging common people into map-making. Now people work together, from Dayak communities in Borneo to activists and experts using the latest. Drones are now put to use in mapping chores to seek a One-Map Indonesia. The area shown in the video is Setulang village in the Malinau Regency. Maps are essential in the fight against foreign degradation.
The forest degradation crisis is not Indonesia’s problem alone. It is a global issue. The role of indigenous peoples is a global issue. That is the reason the world casts its focus on New York for the World Conference of Indigenous Peoples (WCIP) on September 22-23, 2014.‘Drones and Dayaks’ is placed in a specifically Indonesian context but the ideas are inspiring globally. The film will be presented during the WCIP and successive events around the world.
It is part of a worldwide campaign for community rights and care of carbon-rich forests and the idea that they go hand in hand with development policies. Innovative drone GPS technology, community engagement, local government support and eco-tourism are helping the Setulang people thrive. Indigenous people who have lived for generations in the rain forests of the Indonesian islands have taken care of the forests as true stakeholders.
Existing Ministry of Forestry maps are scaled 1:250,000 and do not show the villages where people live. Drone technology can dramatically enhance the scale of maps, to protect indigenous lands from being divided as company concessions. This year’s political development in Indonesia present a historic turning point for the country’s indigenous peoples: in May last year, the Constitutional Court — Indonesia’s highest authority on constitutional law — made a historic ruling on the 1999 Forestry Law and effectively voided the state’s control of customary forests in Indonesia. However, implementation of the ruling has lagged, and indigenous land is still very much at the mercy of the Ministry of Forestry, which officially controls 75 percent of Indonesia’s forests, including some small islands.
Indigenous society leader Abdon Nababan says: “If we are expecting Indonesia to be a major contributor to solving the climate change issues, then the international community must help Indonesia accelerate the recognition and protection of the indigenous peoples, save the best forests, protect areas that belong to indigenous peoples and return their rights.”
Along with Brazil and Congo, Indonesia proudly owns some of the largest and most biologically diverse tropical forests in the world. Tens of millions of Indonesians depend on these forests for their livelihoods, whether gathering forest products or working in modern wood-based industries. The flora and fauna in Indonesian forests are unmatched in the world. Even today, Indonesia’s forests constantly display new species. Forests play a major role in stemming the effects climate change by absorbing more than 2.4 billion tons of carbon dioxide each year. The video ‘Dayaks and Drones’  explores a key element of the climate crisis by asking a very basic question – who is protecting our forests?
Within these forests live traditional and indigenous people who have a deep spiritual connection and understanding of their ancestral homes. This connection is being threatened by a resource hungry modern world. As a result, the people who call the forest their home are now engaged in a constant and frequently violent struggle.
‘Dayaks and Drones’  communicates first-hand the unique personal stories of an inconspicuous yet vital people, as they battle to protect their lives, their cultures and our forests. Protecting our planet is not only about politics and policies, it’s about people taking ownership and taking action, no matter how small.

If Not Us, Then Who?