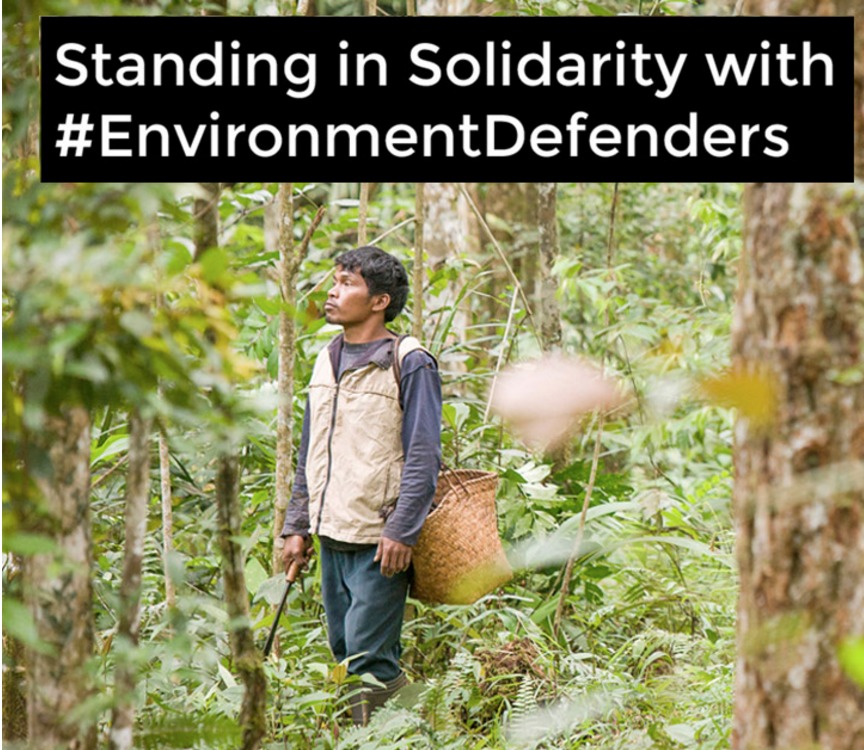 ***MEDIA ADVISORY*** CANDLELIT VIGIL IN TIMES SQUARE WITH INDIGENOUS LEADERS FROM ACROSS THE GLOBE IN PARTNERSHIP WITH JUNGLE-IZED THURSDAY, 21 APRIL, 11.30 PM

The world’s indigenous forest guardians will stand in solidarity with the over 900 environment defenders killed in the last decade.

In advance of high-level UN Climate Agreement Signing and Earth Day this candlelit vigil will demonstrate the unacceptable level of violence and murder against environment defenders globally.

A significant number of governments will sign the Paris Agreement on 22 April, which includes an explicit call to developed and developing countries to conserve and enhance forests and other biological carbon reservoirs. In order to fulfill these obligations countries will need to find proven methods for protecting forests. There is clear and undeniable evidence that where indigenous peoples and local communities have strong rights, there are more standing forests. Yet despite this ready made climate mitigation solution, these communities are not being supported. On average 2 people are killed every week defending their land, forests and waterways against the expansion of large-scale agriculture, dams, mining, logging and other threats.

Indigenous leaders, David de Rothschild and the public will gather in Times Square to coincide with an art exhibition, ‘Jungle-ized’ that will transform Times Square into a forest landscape at 11.57 pm EDT. A number of indigenous leaders will speak of the threats they face including the murder of their loved ones and the constant threats to their livelihoods. As the advertizing screens change to represent forests, a Colombian singer will sing a lament to those who have died in the struggle. Posters of the most recent activists murdered, including Berta Caceres, lit by candlelight, will create a visually powerful backdrop. Join us for a moment of silence, in the middle of New York on the eve of Earth Day.

WHERE: Times Square, next to the Jungle-ized Kiosk

Securing rights to indigenous and community-held land protect against deforestation and can generate significant large-scale returns—economically, socially and environmentally. Forests owned and managed by Indigenous Peoples and local communities contain approximately 37.7 billion tons of carbon—29 times more than the annual emissions of the world’s passenger vehicles.

Despite government and corporate commitments to respect Indigenous Peoples’ rights and prevent deforestation, there has been an uptick in violence against indigenous leaders who oppose projects that threaten their communities and their forests. The murder of Berta Cáceres in Honduras last month; of Edwin Chota, Jorge Rios, and two other Asheninka leaders in Peru in 2014; and the 26 March attack on Equator Prize 2015 winner from Cambodia, Ms. Phan Sopheak, are emblematic of battles taking place in some of the most remote indigenous territories worldwide. Rios’ daughter, Diana, will be among the speakers at the event.

EDITOR’S NOTE: Indigenous Peoples from Africa, Asia and Latin America will be available for interviews. A representative from Jungle-ized will be available to explain their month long exhibition to bring the sights and sounds of the Amazon to New York. Professional photographic and video content will be made available on request.

This event has been organised in partnership with AMAN, AMPB, COICA, Rainforest Foundation US, Times Square Arts and Jungle-ized.

This is one event in a series of environment defenders events around Earth Day 2016.

Find out more at environmentdefenders.com.