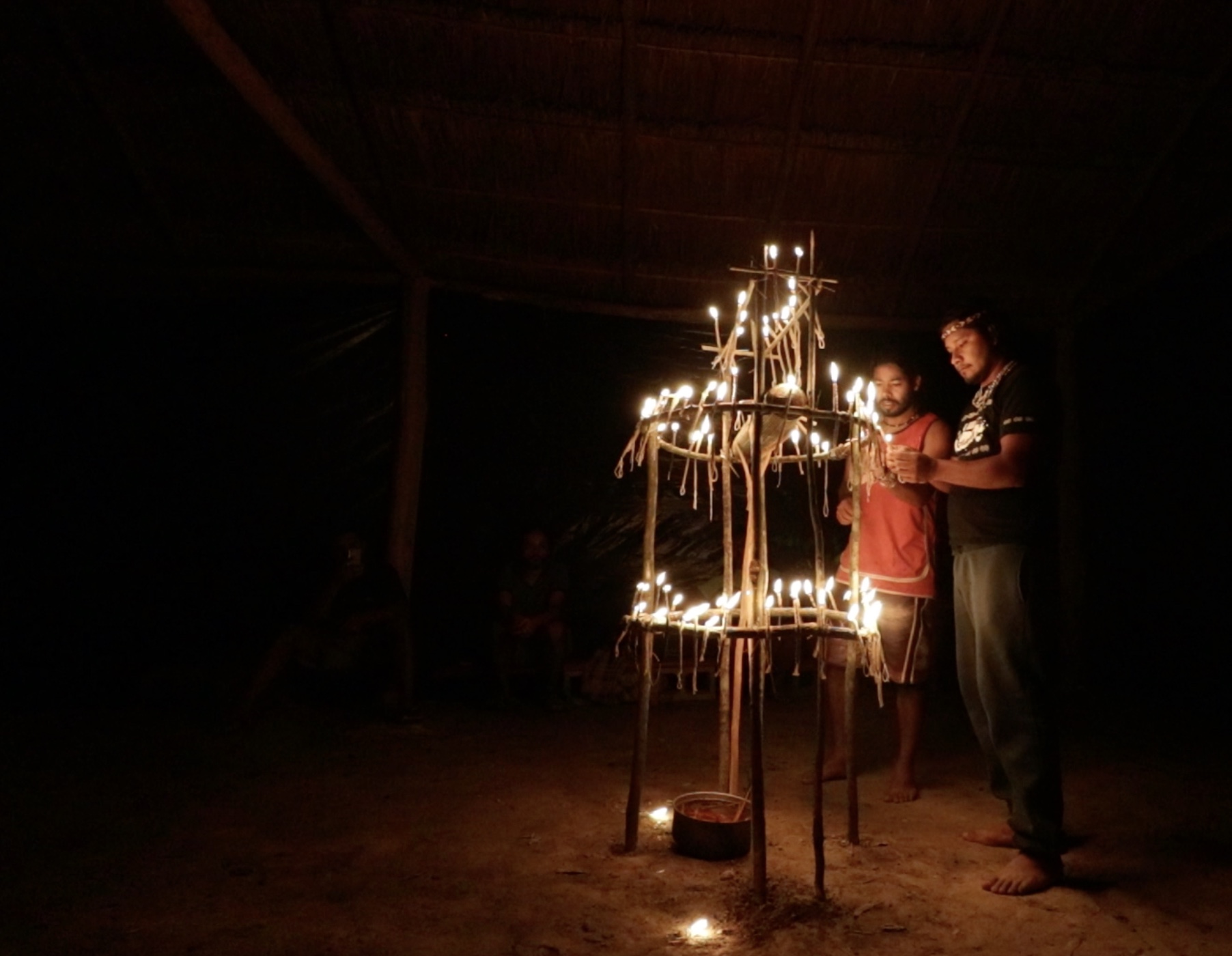 Reflections about Carnival season on behalf of the Guarani people

The Carnival season in Brazil is well known for its huge floats and samba parades. Less well known are the traditional ceremonies of its indigenous peoples that are celebrated during this period. During these festivities, attention is often only drawn to their cultures by the costumes of carnival-goers using traditional indigenous dress, and the heated debates on cultural appropriation generated by it.

During last month’s Carnival, many people, indigenous and non-indigenous, cast their opinions into this discussion on the use of headdresses by non-indigenous revellers, and a number of high-profile celebrities were criticised for it. While the hashtag #Indionãoéfantasia (Indigenous is not a fantasy costume) gained extensive coverage, many dismissed it as ‘political correctness’ and derided this ‘prohibition’.

Amongst these debates, David Karai Popygua, a Guarani Mbya leader from São Paulo, wrote the following text to highlight the importance of this time for his people and to remind that this debate cannot forget the fundamental struggle of Brazil’s indigenous peoples for self-determination and the right to live in peace in their lands.

The Nhemongarai ykarai’i, a very sacred ceremony of my people, takes place at this time of year in all Guarani villages.

In some shape or form, all the people in the land that is today Brazil, have suffered the impacts of colonization. I believe that the non-indigenous, the jurua kuery, have also lost and suffered greatly in this colonizing process, although differently to us indigenous, who have had all the hatred and violence unleashed upon our peoples. The jurua kuery have become divided in ways that still to this day cause contention. The disconnection between the body and the spirit is also what fuels so many conflicts.

Nowadays, I see that the internet has become a place of much ideological dispute, where every day people distance themselves further from what, for us, is the most sacred and important: care for the spirit.

All indigenous peoples have one thing in common: the care and responsibility to keep their culture alive. Indigenous peoples seek conditions to live in a world where self-determination is respected by the governing authorities. However I do not just want to further debate the political issue, but I want to draw attention to the voices of my kin who, throughout Brazil, have taken a stand and spoken out about how the jurua kuery appropriate, commemorate, or even disdain our cultural values.

There is not a singular point of view, for we are more than 200 indigenous peoples. Each people cherishes their culture a lot and always seeks to live in harmony with the jurua kuery. It was not we who started this war, nor our ancestors who imposed a way of life onto society. Throughout our grandparents’ history of struggle and resistance, their sense of motivation had always been for freedom, dignity, and the desire to express openly that they were and always would be indigenous. Today we maintain this desire, we live and think with the same values ​​that our grandparents taught us. After all of this history of struggle and resistance, today we have the dignity and the right to say that we are indigenous.

Carnival in Brazil is a time when many people enjoy playing around, having fun and partying to the new songs of the summer, talking about the samba school themes and songs, and watching their parades. There are others who prefer to stay at home with their family, following it all on the TV. There are also those who do not care about this gigantic celebration, which takes over the streets throughout the country.

I want to highlight that for us Guarani this time is very sacred, because we are coming to the end of ara pyau, our new year. Starting in February, ara yma, the old year, begins. Perhaps this seems a bit confusing for those who do not know our culture, but I think it is important to clarify that this is how our grandparents taught us to live, following nature and being in harmony with its cycles. It is in this period that we have the ceremony of Nhemongarai ykarai’i.

I decided to post this image of a ceremony that is so sacred to us, to show that my people are at a very special moment and that this is how we pass this time of the year. We are keeping our culture alive.

Seeing this photo, everyone should know that we respect the carnival of the jurua kuery (the non-indigenous) and we respect the indigenous people who make the most of this moment to raise the profile of our people’s age-old struggle for survival.

Those who feel within their heart the desire to wear an Indigenous adornment during the festivities must not only think about whether it is politically correct, but must understand that a great struggle for the survival of indigenous peoples is still ongoing.  Neither your political opinions nor the reasons that motivated you to use an indigenous costume matter.

What matters is our hope that, whether you use an indigenous attire in homage, to ridicule or just for the sake of wearing one, that you do not fail to recognise that there has been struggle and resistance, and that indigenous peoples’ resistance will continue for as long as the last warrior who holds the secret of what it means and represents to be indigenous, remains alive.

So if you use our costume and hate indigenous people, we will be praying and fighting nonetheless. And if you use our costume and respect indigenous peoples, we will still be praying and fighting just the same. It is not improper or misguided use that hurts our souls, but the continued massacre and attempted domination of our territories that shamefully stains this country’s flag with our blood. We are ancient peoples and our struggle is for peace and the right to life, our goal is not death and destruction.

I can say, with full clarity, that our path will not be lead astray by a moment of political conflict nor a month of festivities. We find new ways to face and resolve problems when these situations arise. Today we live united, and the understanding of the jurua kuery can help us a lot. It is really important to remember, amid so many attacks and disagreements, that we were not the ones who started this ideological war of catastrophic proportions that is underway in Brazil.

Who would have more reason to spread hatred than the first to be trampled, humiliated, massacred, robbed and wronged on their own territory? On the contrary, we are, at the moment, asking people to look after themselves and others because we are all human. The end-result of war is nothing more than pain, suffering and the desire to start again peacefully.

Do we really need great war again to understand that this is not the path to life and peace?

We know how not to feed war, we will always seek peace. In a war there is always a winner and a defeated side. Our people are not at war, our people are always seeking the spiritual life that gives us the necessary resilience to not enter the war that was embedded into the core of this country’s society, that was spawned over our territory and our history.

May Nhanderu give light to all people of this country and that differences not cause discord and conflict. May our differences show us that in spite of them we can live in these sacred lands respecting one another, that, above all, we are all human beings equal to all those who today live in this sacred Earth.

Aguyjevete to the Brazilian people.