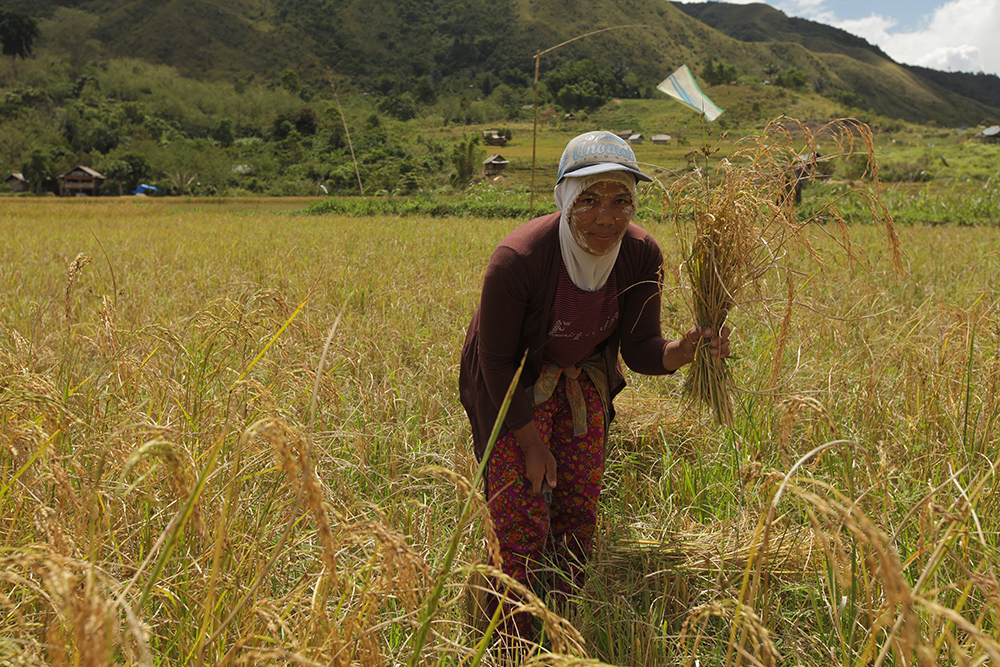 The road connecting Hoyane Hamlet and Pokapaang Hamlet got muddy and slippery as the wet season was approaching, but a few months ago Hoyane women, along with their children, kitchen utensils and tents, travelled through the bad road to gather with others from Pohoneang, Malino, Harana’, Pasangkalua’ and Pokapaan to take a joint action. It took a 2-hour walk from Hoyane to get to Pokapaang.

More than 400 women occupied Puriliang, one of PT Seko Power Prima’s geological survey sites in Pokapaang. In turn, they spent the night there preventing the workers from using the drilling equipment. The women had to take over the activity, previously done by their men, as the men protesting the activity were imprisoned. “We put up tents and slept for days here, in the drilling site. We all speak with one voice,” said Hasmin Tarundu (45) from Malino Hamlet, Tanamakaleang Village. Along with six other women, she took us to see round the survey site and where they put up their tents.

Hasmin told us that all the women in the hamlets were moved to occupy the site and halt all the company’s activities. They shared a mutual understanding among themselves. They shared the guarding roles – when some had to do everyday chores, there  were always some others replacing them to guard until the former returned the next day. Similarly, when some got sick, they were advised to go home and others would take their place. They set up tents on the sloping land to shelter from the sun and sleep at night. In turn, they prepared meals for themselves. They brought all the needed cooking utensils, ingredients and raw materials from home. There were seven kitchens set up near the tents.

For two months, the company could not continue the survey and finally, losing patience, they called on some policemen to disperse the women. On 27 March 2017, five policemen and one military member came to the drilling site. Sarah Restin (27), the youngest daughter of Peter Karla, went forward to meet them, “I was eating when the police came. I stood up right away and met them. ‘What’s up, sir?’ I asked. ‘We came here to disperse you, women. We have asked you to disperse and go home several times. The company wants to continue its activities. The survey is almost done,’ said one of the policemen whom I met.” She also told us that the army member who was coming with the policemen was named Hendrik.

The women refused to leave; they kept circling the drilling equipment, holding a banner saying ‘We Won’t Accept! The Land Is Our Life.” The police approached the women and tried to disperse the crowd. They pulled out the tent poles while shouting at and intimidating the women and children. “You go home or I’ll shoot you!,” Sarah repeated what one of the policemen said. One old woman stood still, trembling with fear and said to Sarah that she wanted to go home. Sarah let her go and the old woman grabbed her bag and went home. When the women wanted to videotape what the policemen were doing with their smartphones, a policeman spoke to them angrily. “No shooting, if you do, I’ll shoot you,” Sarah repeated the policeman’s words.

As the women refused to go, the policemen shot tear gas three times. With eyes and lungs irritated, the women ran scattered. Crying, they tried to help an old blind woman. One of the women passed out and was trampled underfoot in the panicky crowd, fortunately only for a few seconds.

“Two days after the tear gas shooting and the dispersal, the company resumed its activities under police’s protection. After the incident, we do not dare come to the site again for fear of being arrested,” said Lorina (31), who also took part in the women’s action. She went on telling us that they did not come to the site again not because they surrendered but because they were afraid of being arrested and were being threatened by the police. “We were being snapped and questioned all the time ‘who was the leader? Who drove you?’. Lorina and the other hundred women taking part in the action were so much traumatized by the intimidating act by the police that to date they still have been afraid of the police and the army.”