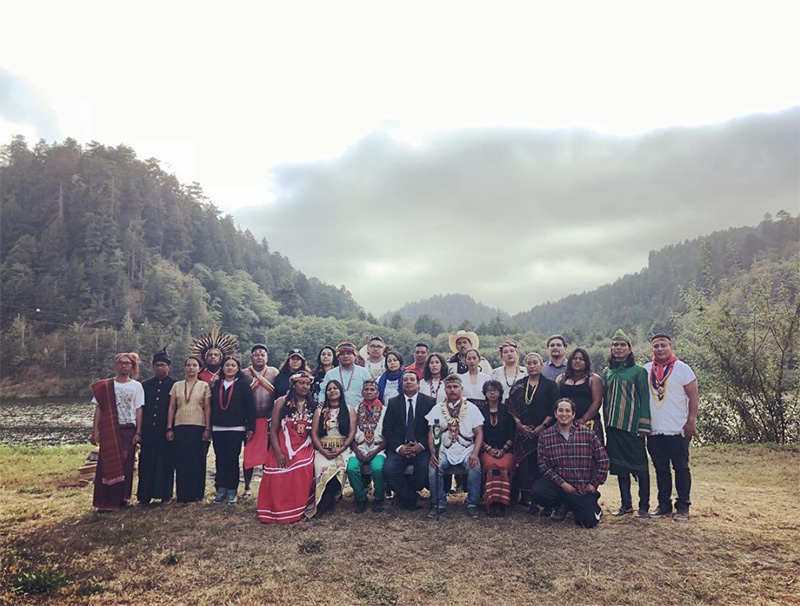 Every year on August 9th the UN officially recognises and celebrates Indigenous Peoples around the world.
Festivities take place around the world, in indigenous communities but also in towns and capital cities too.

Two films by indigenous filmmakers are being released on August 9th 2020.

The first: The Sungai Utik community in West Kalimantan and their protection of their customary land is emblematic. Young local Dayak filmmaker, Kynan Tegar, traces their story.

The second: On the other side of the world the Sapara peoples of the Ecuardorian Amazon are fighting against government approved oil concessions on their land. Indigenous film collective Tawna explore the story of Sapara customary land.

Go behind the scenes with these filmmakers as they discuss cinematic communities with Hollywood actor and If Not Us Then Who board member, Bill Pullman.

Recently published articles feature photography by Kynan Tegar and an article and imagery by Edgar Kanyakõ. The Guardians of the Forest also publish a statement for Indigenous Peoples’ Day 2020.

Biodiversity loss disproportionately affects poor and Indigenous communities. Because many of these communities rely heavily on biodiversity for food, livelihoods, and health, declines in biodiversity have a more severe impact on them, and in fact they are already experiencing this loss. A quarter of the land on Earth — representing a significant amount of the world’s biodiversity — is home to Indigenous people. For thousands of years they have stewarded our planet’s wild places. Not only is protecting their ways of life important, but their traditional knowledge also can help to protect biodiversity. If we take action now, we can protect biodiversity, lift up marginalized communities, and make progress against inequality and poverty.

Sungai Utik’s struggle to protect its forest, which stores some 1.3 million tons of carbon, began in 1973. That’s when a Malaysian logging company showed up with a large box once full of instant noodles but packed with rolls of cash. Many other loggers, pulp-and-paper companies, and palm-plantation owners soon came bearing gifts.

To assess these offers, Apai helped lead a slow, careful Dayak Iban deliberation process, enabling all adult members of the community to weigh in on the potential costs and benefits. The community determined that the money would run out quickly, but the damage to the forest would last for generations. “We knew if we lost our forest, we’d lose our culture,” Apai said.

The Xakriabá people’s way of life is all about the relationship we have with the forest, the creatures, and the spirits. For us, there is no clear division like the one that whites make between nature and culture; for us these things are related — humans and nonhumans, man and animals. This relationship constitutes the way we see the world.

Statement on the International Day of the World’s Indigenous Peoples

In 2020, the International Day of the World’s Indigenous Peoples takes place against the backdrop of a deadly pandemic that has exacted a terrible toll on the Indigenous Peoples and Local Communities who inhabit and defend forests and other natural resources in the tropical forest regions of Indonesia and the countries of Africa and Latin America.

Safeguarding Biodiversity In Borneo With The Dayak Iban – UN Foundation

As a member of the community I feel truly thankful and really proud of our elders who have protected our lands from illegal logging and companies trying to come into our customary land. They never gave up their struggle so that to this day, our forests are still here and our rivers are still clear.

It’s our task to continue what they have been doing. To protect these customary territories and forests, because one of the values that our elders teach us is that the land is our mother, the forest is our father, and the river is our blood.

“Our peoples see the forest as our mother, the river as our father. We have everything we need in these sacred groves.”

Indigenous peoples and local communities offer a very real solution to the climate and ecological crisis but they face persecution and violence and their land rights are often not recognised.

Find out more about their demands here: https://ifnotusthenwho.me/demands/

While the debate of what precisely constitutes ‘indigenous’ continues in certain spaces what has been made very clear is that local communities face similar issues and also provide related solutions to the global problems we face.

The UN body for Biodiversity, the IPBES uses the following definition:
“Indigenous peoples and local communities are, typically, ethnic groups who are descended from and identify with the original inhabitants of a given region, in contrast to groups that have settled, occupied or colonized the area more recently. “

So you will often find the two terms grouped together. And sometimes you’ll see IPLC used as an abbreviation.