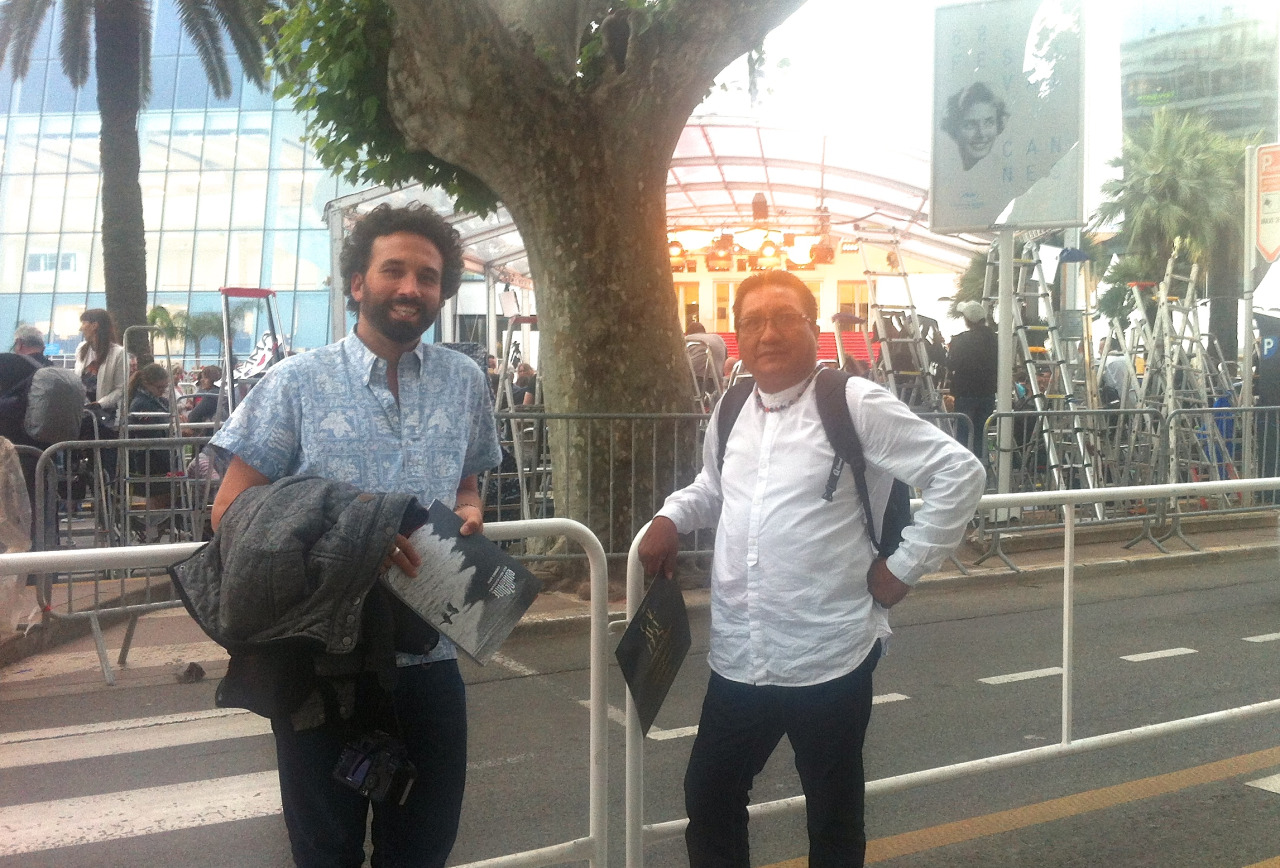 This year, with the ifnotusthenwho.me campaign against deforestation and two great companions: Paul Redman and Jocelyn Thérèse; we “did” the Cannes Film Festival.

We went there to show our videos, to talk about Indigenous Peoples (IP) issues on the road the to Paris COP21, to show the world that IP are a “ready-made solution” to protect our forest, to talk with directors, actors and producers about the importance of IP wisdom, knowledge and care for forest protection, to talk about human rights and to talk about the power of this industry. Power this industry doesn’t use much yet. But maybe soon we hope. Well, at least we work on it.

Cannes… the Croisette boulevard, the palm trees, the stars, the starlettes, the wannabes, the marketplace, the expensive food, the red carpet and the stairs… Everything was right there, looking like a vintage postcard, waiting for us.

First, we met Ciro Guerra, director of “El Abrazo de la Serpiente” a Columbian film competing at La Quinzaine des Réalisateurs (thank you Christine Oberdorff for this). And the only film IP related this year. At least there is one. Ciro looks like a mob boss with his dark sunglasses, talks with a very friendly voice, has always wanted to make a film with and about IP from the Amazon rainforest and likes challenges in his work. So he took three years to write is “guion” (script in spanish) because he wanted to properly understand  the IP spirit before going into production. He tried to convince producers and distributors to come on board in this crazy adventure for a couple of years too and then he decided to shoot the film in … Amazonia. 12 weeks in the Columbian rainforest with IP communities and two amazing indigenous actors: Antonio Bolívar & Yauenkü Miguee. The film is great, the first story with a true and respectful IP point of view on forest, colonisation, life and nature. The trailer is available here: https://www.youtube.com/watch?v=FdOYd-21qaA.

The film received a 10′ standing ovation at the official screening. We were seated right behind the team. It was amazing, we could almost feel the energy of the audience and the vibrations of the never-ending applause. So many people touched by the IP messages. Thanks Ciro for this great work! The basic demonstration that a good film can do more than thousands of explanations.

Later we played what seems to be a local sport during the Quinzaine: “Who wants to sneak in an official Canne party?”. We lost this game. But it was fun and essential for us understanding what Cannes is. A great film festival, an annual marketplace for what the Americans call the industry and what the Frenchies call the 7th art and a crazy superficial giant venue to welcome all kinds of people and I mean ALL kinds of people. I understand better now why tabloids sell so much.

The day after was occupied preparing for our main event in Cannes : a panel organised by Horyou and Ushuaïa TV on “IP & Cinema” hosted by Christine Oberdorff (thank you Christine!) to which Paul & Jocelyn were invited to participate. We finished the french subtitling of the ifnotusthenwho film: “Our Fight”. We practiced on our key messages with Jocelyn from FOAG (http://www.solidarite-guyane.org/FoagP0.htm) and COICA (http://www.coica.org.ec). And we visited the Horyou village. We met some good fellows in the Horyou team : Marion, Raphaël, Xavier and Christian. This social network for good is still a work in progress but their attentions are good, their purpose too and their studio situated in the garden of the Grand Hotel was amazing.

We did a last rehearsal with Christine and some of the panel participants and… something suddenly happened. Like a light in the sky. Cannes came to us. Champagne bottles arrived on the table, the music got louder and some overdressed people began to gather around us. We were actually sneaking in an official Cannes party. And The Variety one, please! A dinner and a couple of wine glasses later we agreed on the fact that the music was definitely too loud, the communication impossible and the ratio advantage / disadvantage of staying longer was in favor of a retreat. But thank you Horyou and Christine for this bite of Cannes flavour.

Here comes the day of the panel. Great work from the Horyou technical team and especially Christine Oberdorff from Ushuaïa TV. She managed to catch a great last minute interview from Abderrahmane Sissako (Timbuktu director) and to make this panel real. Nothing live on the web but we were broadcasted live on the Croisette and had a pretty good audience on twitter too. The panel is available now on YouTube, please watch it! https://www.youtube.com/watch?v=4d7nEyPZaE4

A couple of interviews for Jocelyn and Paul, a last hug with Christine and it’s already time to leave Cannes. Paris, ministries, cop21 prep, officials and friends are waiting for us. But Cannes was a success. Good meetings, good memories and especially a good feeling that in the middle of this crowd intending to desperately get attention we were not lost and that we might have started there something useful and meaningful on the road Paris. Like a spark.

Let’s keep up the fight. With them, for them and for us all.

If not us then who.