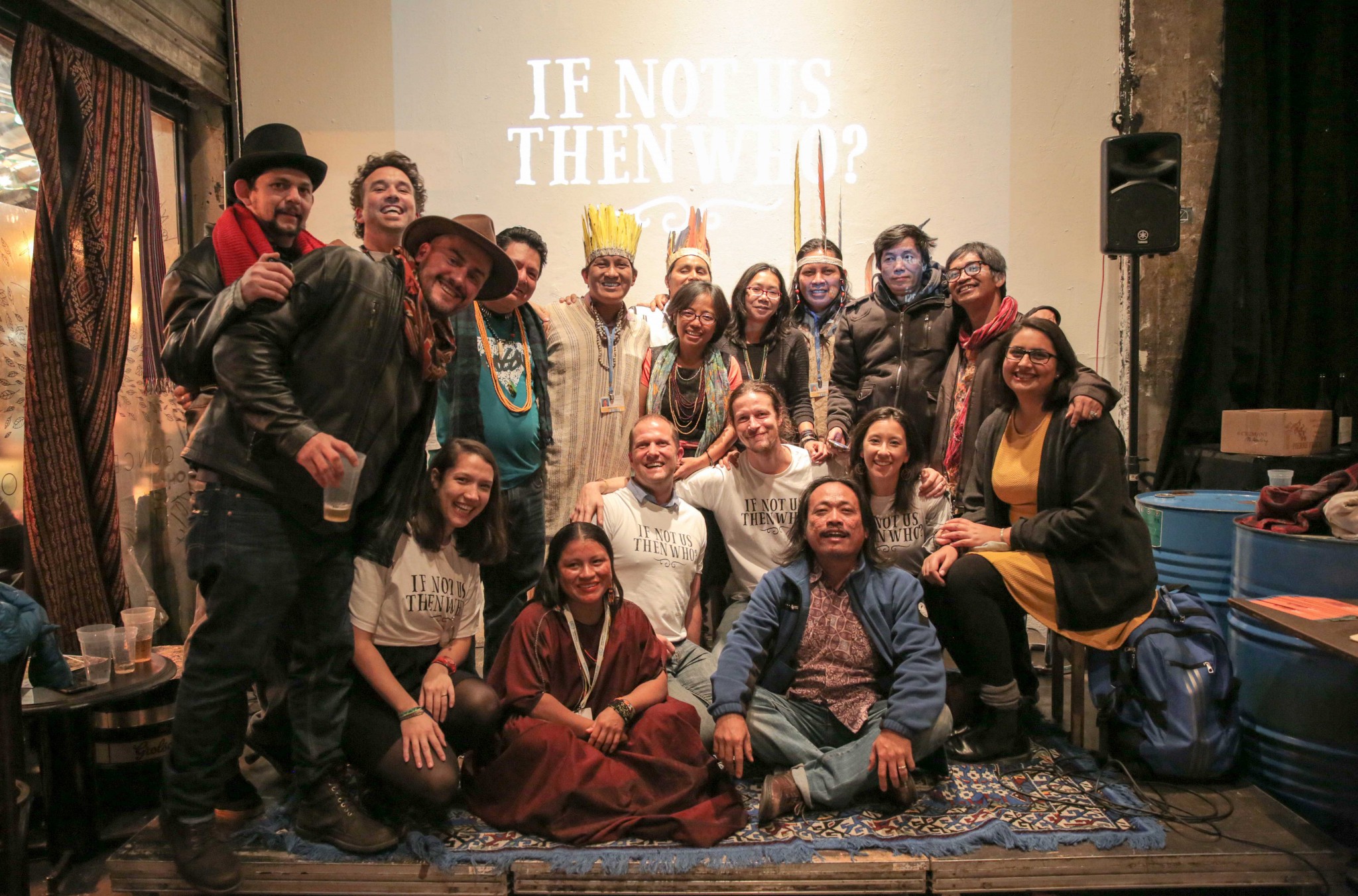 During the Global Climate Action Summit we supported the travel of over 40 indigenous peoples to California and with our Indigenous partners (AMPB, AMAN, APIB & COICA) and our communications partners (Burness Communications & Purpose) who all worked together to amplify community demands using #Guardiansoftheforest . Prior to the Summit we all gathered on the banks of the Klamath river, in Yurok territory, to share messages and build understanding with the indigenous peoples of Northern California. We then all travelled to San Francisco to support their engagement at the People’s Climate March and at our 4-day headline event, ‘Our Village, Community Corner’. The community corner space provided a platform for the world’s indigenous peoples from Fiji to Panama and it connected them with allies and influencers in the bay area. The feeling for the space was summed up in an article by Justin Catanoso in Mongabay.

‘It had the feel of a family reunion as their stage rang loudly, day and night, with cries and chants to ancestral spirits and translated words of age-old wisdom…It was a pleasure participating in the wonderful community space you created with the Hip Hop Caucus in California’

For the history-making COP21 in Paris, we took over a space in the heart of Paris city centre for our most ambitious community corner to date: 8 days of events, partnering alongside our indigenous partners from Indonesia, Central America, Amazon basin and Congo basin and more than 20 organisations.

Our Paris event was the culmination of all our events to date; Diana Rios silenced the hall with powerful testimony, Mina from Indonesia implored us to save the forests, Candido Mezua from Panama talked of the importance of recognising indigenous rights in the wider climate change debate, to name a few. We had capoeira displays, women’s panels, drone workshops, ethical consumer markets, impromptu music and theatre performances.

Reconnecting with AG Sano from our earlier Tacloban film, he painted a powerful mural to those already lost to climate change. His brother Yeb, whom this project is named after, joined us on Human Rights Day to support the work of indigenous peoples and environment defenders.

Despite the tightened restrictions following the terrorist attacks and the long days at the formal UNFCCC meetings, Point FMR, was a popular meeting and relaxing spot throughout the negotiations, bringing together a wide intersection of people.

The collaborative partner approach we experimented with in Paris has gone on to be a blueprint on how we build events and community corners.

We launched the DRC film, Sanctuary in conjunction with Le Monde.

We took a different approach in Bonn, Germany in the Summer of 2015 – aiming to reach climate negotiators, UN staff and those specifically in Bonn for the intercessional meeting before the all important UNFCCC meeting in Paris at the end of the year. We wanted to remind the decision makers on the importance of indigenous peoples input into the process, so we took delegates away from the formal venue and into a theatre. Our indigenous partners took centre stage, under spotlight sharing their realities. We were supported by UNFCCC Communications Director Nick Nuttall and European NGOs and the night ended with dancing. There is always dancing.

Building on the itinerant model – we stepped up our geographical ambitions and hosted a four-island festival in Indonesia in partnership with AMAN and INFIS. Screenings, galleries, panel discussions and dancing were organised in Jakarta, Java; Sorong, West Papua, Toraja, Makassar and finally Bogor, Java.

This was also the birth of our anthem – thanks to musician Dadang, who supported us on tour – he surprised us in Toraja with a new song – Siapa Lagi Kalau Bukan Kita? (If Not Us Then Who? in Bahasa Indonesia). This catchy tune has gone global and is now our anthem, Dadang has since performed with us in France and the US. Friends at XX captured an alternative version with AMAN’s indigenous youth celebrating the linguistic diversity in Indonesia.

The second community event saw us experiment with the Itinerant Film Festival approach, rather than basing ourselves in the one place in the lead up to UNFCCC 20 in Peru. We hosted different events around the city of Lima to reach different audiences. We reached indigenous activists screening at the AIDESEP offices, the press at Museo Nacional de Antropología, Arqueología e Historia, urban indigenous in Cantagallo, students at Universidad Nacional Mayor de San Marcos, the concerned public in Barranco and finally at formal side events during the UNFCCC.

We partnered with Global Witness and Rainforest Foundation US to support the launch of Peru’s Deadly Environment report, bringing the protagonists to Lima to tell their story. Research showed Peru to be the deadliest country to be an environment defender in 2014; the facts were supported by the release of Our Fight – exploring the aftermath of the death of Edwin Chota and 3 other Asheninka leaders. The strategic release and following news coverage just before the start of the climate change meeting helped shine a light on indigenous rights and illegal logging in Peru. Diana Rios, daughter of Jorge Rios, has since gone on to champion the rights of her community and work with local and national government to step up enforcement against illegal loggers. Campaigning tirelessly, in 2017, Saweto formally received its land title.

We also released Reunion in Lima working with the Harakmbut community – Jaime and Luiz championed this film in their campaigning efforts to protect their territory from further oil exploration.

We have since gone on to tie a release of a new film in with a report and global gathering such as UNFCCC, wherever possible. Breaking out of the ‘green bubble’ and screening films to local residents has been an ongoing theme of If Not Us Then Who? events – so has live music!

If Not Us Then Who? launched in September 2014 during the UN Climate Summit. We hosted our first community corner in midtown Manhattan, a stone’s throw away from the UN building. The pop-up gallery space was used as for planning meetings, panel discussions, press conferences for our indigenous partners throughout the climate summit. Its central location made it a meeting point for activists, campaigners and journalists alike; audio sounds from the Amazon being played onto the  the New York street and evening performances and screenings also brought in the curious.

More than X people engaged with the space – with an informal and friendly air, sitting firmly on the intersection between arts and campaigning it set the tone for community corners to follow.