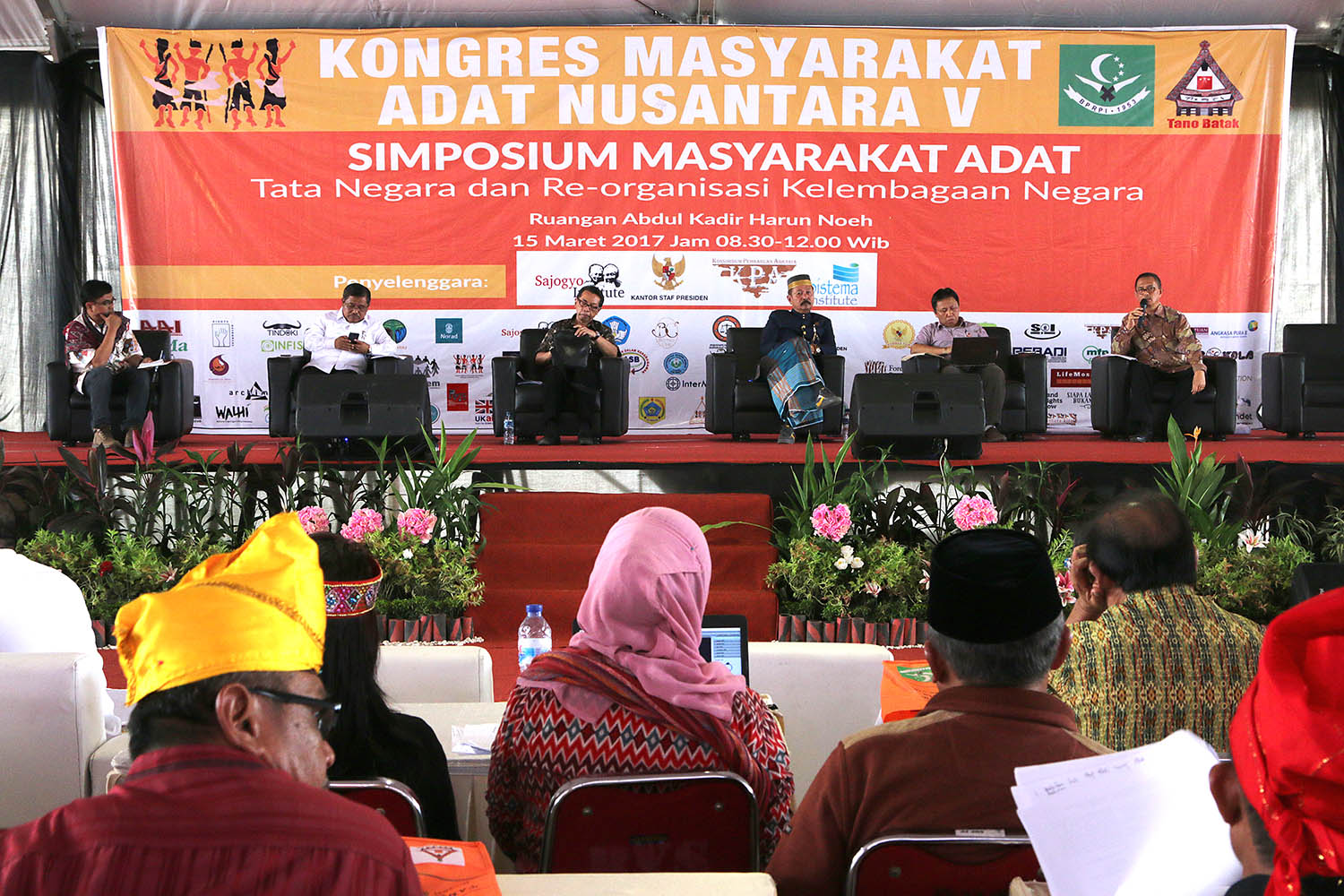 Indigenous-themed symposium in Constitutional and Institutional Reorganization of State on Wednesday (15/03) marked the start of the 5th Pre-Congress of Indigenous People. It took place in Abdul Kadir Harun Nuh, this symposium will oversee a series of activities that will take place until Sunday (03/19). The first speech was delivered by Deputy IV of Politics and Law, Jaleswari Pramordiawardhani representing Chief of the Presidency Staff, opened the event that began at 9:00 am.

Introduction to the discussion was submitted by the Secretary General of AMAN, Abdon Nababan who explained the history and commitment of AMAN movement until today. In his speech, Abdon revealed that dialogue approach is methods applied by AMAN as an attempt to attain recognition of Indigenous sovereignty.

Moderated by Eko Cahyono, discussion on The 5th Indigenous People’s Congress was attended by five speakers: The Former Member of the Constitutional Court Achmad Sodiki Professor, the Composer of Draft UUP-PHMA Dr. Rikardo Simarmata, Advisor to the Minister ATR Bahrunsyah, Indonesian legislative member, Lutfi A. Mutty, Director General of Social Forestry and Environmental Partnership (PSKL) The Ministry of Environment and Forests (LHK) Daryanto and Expert Staff of the Government in the Ministry of Domestic Affair, Dr. Suhajar Diantoro.

During the discussion, one of the speakers that Lutfi A.Mutty states that indigenous peoples are the foundation of insight into the culture, so it should not be forgotten. Lutfi also found reality inversely in the field, it is evident that the lack of recognition of the role of government to encourage or protect indigenous peoples. Why was the draft of law dealing with recognition and protection of Indigenous peoples abandoned, because the one sent by the indigenous people was not competent in terms of knowledge so that the result was not satisfying. Now it is not the time to deliver something unreal, what is needed is real work of indigenous peoples, he said.

The series of Thematic Workshop on Day One KMAN V

8 thematic workshop on the agenda were also held on Wednesday (15/03) at Kampung Tanjung Gusta, Deli Serdang, Medan in The 5th Indigenous People’s Congress. Workshop activities that took place from 14:00 pm until afternoon was attended by hundreds of participants from different provinces.

The purpose of organizing this workshop is to increase the understanding and knowing how to proceed, in addition to maintain the forest as well as recognizing the rights of Indigenous Peoples in the future. The discussion forum participants set dialogue and express their aspirations with enthusiasm.