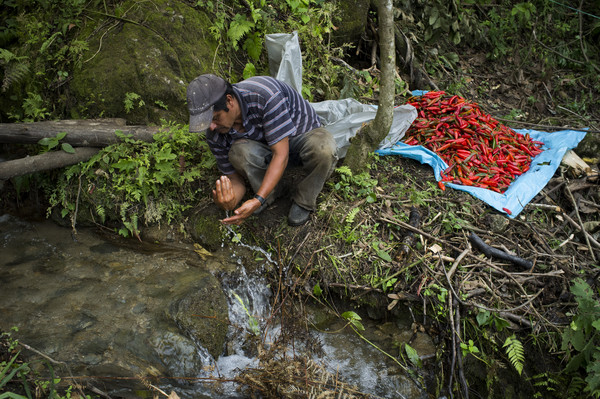 They call it “chile mixe” in Oaxaca, because the indigenous of the Mixe Media Region, in the mountains of Oaxaca, Mexico, cultivate it. In the rest of the country those who have the knowledge to distinguish it call it “chile pasilla oaxaqueño”.

This chili is very important for the Mixe culture, because it was the main product in the region for many years, but in the last decade this has changed. It is no longer the economic base, they produce coffee and other easier to grow products.

They consume chili daily, the day laborers take them tortillas, chili paste and beans to sustain their day.

Its importance is more cultural than economic. They use it in rituals, mostly in funerals. When a person just dies, the town organizes to cleanse the place to bury the person, and the people who are going to dig the hole. Then they set fire to the chili and they smoke them, to purify them and the burial site. Then, in the procession from the church to the burial site, they clean the road, smoking it. The level of spice is impressive.

Although it is no longer their main sustenance, people consider it part of their cultural identity.  Producing coffee is now more profitable so there are fewer chili producers and so les chilis.

Its flavor is very spicy and hot. It is very delicious; with its signature smokey taste. In November, after Day of the Dead, the planting season begins, they plant the seeds in 800 or 900 meters above sea level land, they throw the seed to germinate. In January they return to see how it goes, by then they must have prepared the land where they are going to relocate the seedling, a site a little colder and higher. Then at the beginning of February they take the plants out helped by animals and transplant them, women sow the land and men replant. Between February, March and April they have to be very vigilant that the animals do not eat the chilis, there is always a big risk that the sowing is damaged, either by the animals or by the climate.

In May that the rainy season starts they have to be even more careful, because the chilies are already growing, some are already ripe, and they have to harvest them at the exact point, not before if later because it changes its flavor. It is critical, if it did not grow in time before the heavy rains arrive, the root rots and spoils, it is very delicate.

Nobody knows when it’s going to start raining. Before, rain always started in May, but in the last 6 years this hasn’t been the case, sometimes it starts to rain at the end of March or the beginning of April, and since that can’t be controlled, it’s a hazard. Those days are when the chilies are growing, but they are not mature enough, and with the anticipated rain the roots absorb too much water and begin to rot before the peppers are ready to be harvested.

In addition, any type of chili needs the heat, if it is not hot it does not grow or produce enough chili, because in addition the community does not use any agrochemical.

As soon as they are cut, almost immediately they have to put them to the sun to dry. So, if it is already raining on the harvest days, they take much longer to dry and that’s a risk of being eaten by the animals or of rotting.

Once dried, they smoke the chilis. Women gather the oak and together they make a very rustic structure, they install the firewood down, they light it and the flame has to have the exact point. This last step is what makes it so special.

The chilis are moved one by one by hand. People take turns so the fire doesn’t go out nor the chilies are damaged. It is common among the producers to have eyesight problems because the smoke reaches their eyes.

Throughout this process 60% of the production is lost, these chilis are rare delicacies. That’s why its price is very high and competitive. The touts [resellers] abuse of the need of the community and buy them at very low prices when people are desperate to sell it.

With the dried chilis they prepare a paste, the “chintextle” they use for their different recipes.

“Machucado” is the ceremonial dish that is made with this chile, they make it on August 1st of each year, and on other important dates for them. In addition to the mixe broth, which is a broth with vegetables and chicken that is accompanied with a rolled bean tamale, it is like an arm. And they also add chintextle.