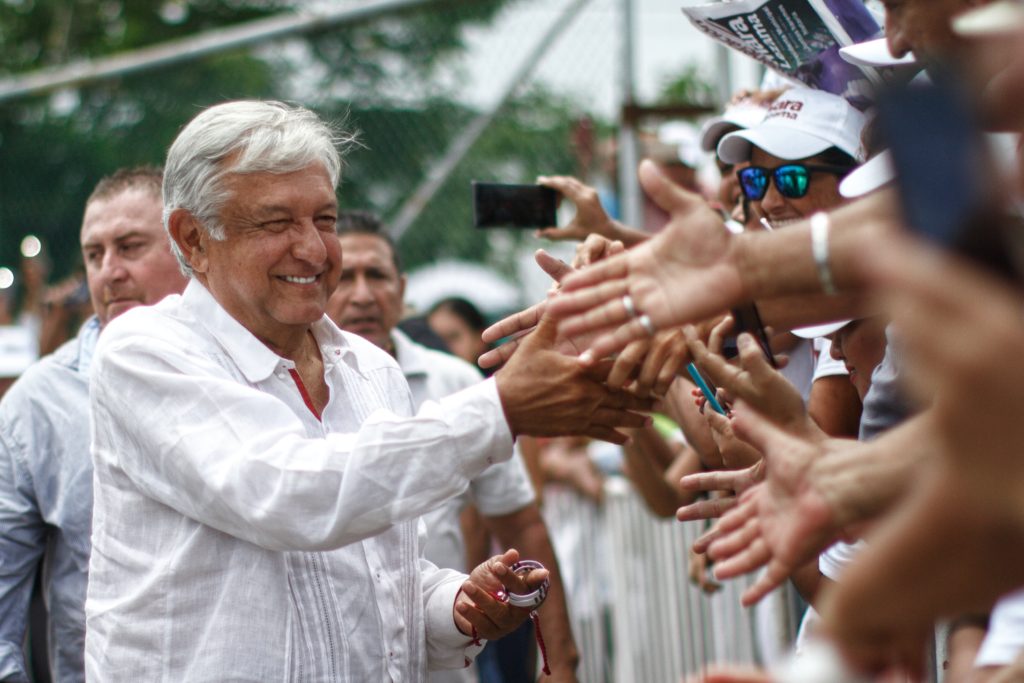 Mexico: a Narrative of Change and Hope

Election results in Mexico encourage expectations for local community rights and environmental preservation, in a country where almost ten million indigenous peoples live and which holds the 5th place among the 17 most biologically megadiverse countries.

On July 1, Mexicans elected their government for 2018-2024. Andrés Manuel López Obrador (AMLO), “El Peje”, as many call him, will become the first leftist president in Mexico’s history on December 1st.

Andrés Manuel as a candidate and now as president-elect promised that public decisions will be made considering indigenous peoples. In his victory speech on Sunday night, he declared: “We will listen to everyone, we will attend to everyone, we will respect everyone, but we will give preference to the most humble and the forgotten, especially to the indigenous peoples of Mexico.” In other words, any project or proposal of governmental policy that impacts on indigenous peoples’ territories or that potentially affects their interests, traditions and culture, must include prior consultation with impacted communities.

Gustavo Sánchez, leader of the Mexican Network of Peasant and Forestry Organizations (MOCAF) –whom we have collaborated with the last two years–, said there is a great expectation in the communities and ejidos of Mexico regarding the public policies promoted by the administration of Andrés Manuel López Obrador.

“For Community Forestry Management, we hope to see strengthening of citizen participation and the full and effective participation of indigenous peoples and local communities in the definition of the forest policy; the reactivation of sustainable forestry production and the generation of jobs in communities, among other issues and in line with the agenda that we are proposing within a group of organizations with the Forest with People, Forest Forever campaign.”

In a telephone interview, Gonzalo Nolasco, President of the Surveillance Council of the Association of Silviculturists of Zongolica and activist of the Indigenous Peasant Organization of the Sierra de Zongolica in Veracruz, shared with us:

“We [indigenous] believe that all this is in favor of the communities because not only did he [Andrés Manuel] win but also the entire Congress, [they won the majority at both chambers that will support his proposals]. We as organizations have the task to propose and revise the current laws because right now only private investment is respected, to whom holds the capital. Regarding the projects of mega constructions and dispossession of the land, the laws are made in favor of the businessmen, they are always justified because what they do is legal and then we can’t do anything. The new government opens the possibility that the laws that disfavor us are revised and reformed. So as organizations, we have to come up with clear proposals from each of the regions. We hope to review and investigate works in process, to rethink them or if it is necessary to stop them.”

Josefa González Blanco, future Minister of Environment and Natural Resources, recognizes the important relationship between nature and traditional knowledge, in what she calls “biocultural heritage”. This concept challenges the vision of environmental policies in the background because it places indigenous cultures in the spotlight as pillars in nature’s preservation.

“It seems to me that there is a great possibility of looking at nature, biodiversity and natural resources from a different perspective,” says Amelia Arreguín, General Director of EcoMaxei and National Coordinator in Mexico of the Global Youth Biodiversity Network (GYBN)

“NaturAMLO [Josefa González’s agenda] talks about an environmental justice perspective, Josefa’s position is that they will not allow economic development policy to be carried out at the expense of nature. Among the young environmentalists I have heard, there is hope that Mexico will grow with sustainable development and respect for human rights and indigenous peoples, to solve so many socio-environmental conflicts. Particularly forests, it mentions respect, drive for legitimate owners that are the indigenous and local peoples. In fact, discussion of a possible reversing of the Forestry Law has been discussed [recently approved and very controversial for not having consulted indigenous and local communities].”

It is up to Mexican civil society to strengthen itself, to raise its levels of demand and participation, organizations have the task to monitor and ensure that such proposals are effectively brought into fruition. If Not Us, Then Who? will work closely to give testimony, support and disseminate advances and achievements regarding rights of the peoples in charge of preserving Mexican forest’s biodiversity.

This July 1, in the words of Jorge Volpi published by El Pais, “Mexico of social movements and human rights’ activists [triumphed]. Mexico of the disadvantaged, of the forgotten, of the invisible. Mexico of young people who yearn for a better future [which] after Brexit, the United States or Colombia’s disappointments shows that it is possible to imagine a new narrative of hope.”

We wish that Mexico succeeds and sets an example to the rest of the world that sustainable development and respect and integration of indigenous and local communities in the progress is possible.

In addition to the interviewees, we send thanks for his valuable help on composing this article to a great colleague and expert in the subject, who can’t be mentioned because of his job in an important international institution.