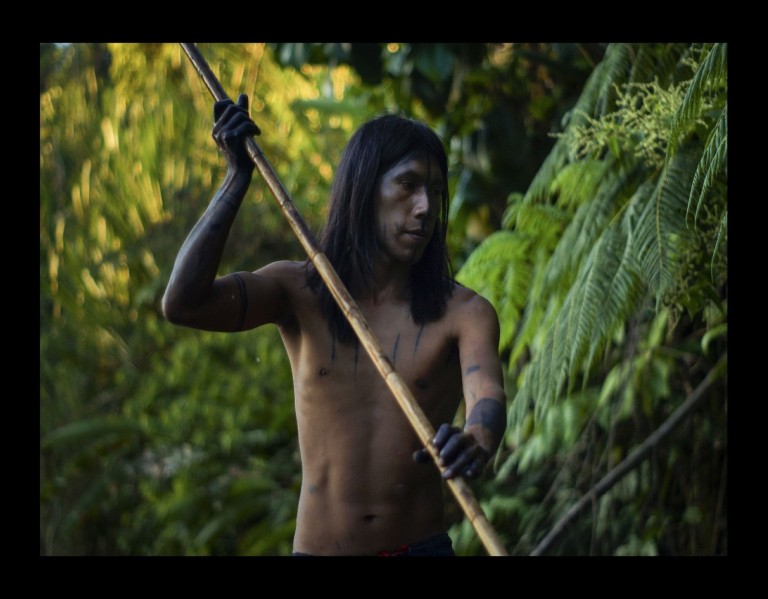 Yanda Inayu (kichwa name), known as Twaru in his native Sapara language and Lenin Montahuano Ushigua in Spanish, was born in the community of Llanchama Cocha, Pastaza province, in the deep Ecuadorian Amazon. He is a filmmaker and founder of ‘Tawna: cinema from the territory’.

My story is born from the knowledge and wisdom given to me by my grandparents through their struggle and resistance. My perspective was built with them and with my community, and it has guided me as I have traveled to many countries exposing how the planet and its cultures are risking extinction due to the presence of road construction, oil, logging, hydroelectric and mining companies in ancestral territories.

I took my first steps in the field of communication thanks to a radio program called “Witsaja Taikuaka”, a space in which we shared words and phrases from the Sapara language in order to sustain what we have left of it. After this, my experience expanded through various activities: in 2013 I gave talks in Germany on “The Amazon that we have left”, a conference in which I addressed the situation of peoples and nationals in Ecuador, in 2014 I participated in the Conference of the Parties to the UN Framework Convention on Climate Change COP in Peru, in 2016 I was part of a project called “La Nave Va” through which we carried out workshops, conferences and a traveling school of communication in different communities and cities from Ecuador, Peru to Brazil, through the Amazon basin.

In 2017 we formed the group of community communicators and communicators from the great Ecuadorian Amazon called “Digital Lancers”, with whom we learned different technical tools such as video editing, camera management and audiovisual production, content for social networks, among other things. In this same year, thanks to the trust placed in me by those who make up my nationality, I was elected as Leader of the Communication and Economics Area of ​​the NASE (Sapara Nation of Ecuador), a position in which I worked until December 2019.

In 2018 I participated in world conferences organized by TEDx (Technology, Entertainment and Design). In this same year, together with a passionate team, I started “TAWNA, cinema from the territory”, a group that lives and operates from the heart of the Ecuadorian Amazon and that was born from the dream of transforming, and bringing with the oar of our canoe, the message of the world’s cultures, to the cinema.

In 2019, thanks to the commitment of all of us who are TAWNA, we won First place in the best documentary short film category at the Kunturñawi film festival with our short film “Vestimenta Sapara, a tradition in danger”.

I am a young Sapara who looks at the world from a spiritual point of view and I have dedicated my steps to sharing my word and my Nationality through stories and stories about dreams. Thanks to what I have achieved and formed a network of allies who know and recognize my work and commitment to projects that allow me to grow while maintaining love for my roots.