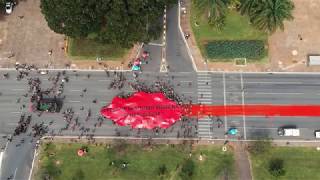 “Tamuaté-Aki” (We are fed up) is a campaign from Uma Gota no Oceano and the filmmaker Marcos Prado. The result was 4 million and a half emails that were sent by the population to the National Congress, claiming the right of indigenous peoples to land demarcation in Brazil. The campaign highlights the importance of indigenous lands, relates the rights of indigenous peoples to the effect of climate – noting that the last large green areas of the Brazilian Amazon are indigenous territories and that is why they are threatened.

Find out more at: umagotanooceano.org